Topsy-turvy, inside out world

I have mentioned many times on here that before I set myself to a task, I imagine myself doing it. It makes fatigue manageable, and has become part of my daily routine. I like to schedule each day with activities I feel like doing, and tackle one project at any one time. At any rate, today I was whisked away to do some shopping. It wasn’t on my agenda but I agreed as I was feeling okay. Well, once I started moving around the supermarket, I got blurry and wobbly rather quickly. By the fourth aisle, I was seriously contemplating going back and sitting in the car. However, I pushed through, but by check-out time, I was shuffling again. To make matters worse, we didn’t have enough bags, so I had to go back to the car to get more. The supermarket only has one entrance and one exit door, both can only be used for that purpose. The entrance door has no other way back to the check-out other than up an entire aisle and down another. So, I was shuffling along in a fog of bright lights and colours.

An interesting observation. There were other people in the supermarket, obviously, but also people in wheelchairs and using canes. It comforted me in an odd way. I guess because I knew they would understand how I felt as I fumbled on my feet, blindly searching for my partner who was buried behind queues of people, waiting to offload trollies onto conveyor belts. Another interesting observation I have captured via photo and uploaded below …

It is the third of October, Halloween is on the 31st, and Christmas not until late December. Thus, what is it? Halloween or Christmas? I thought they may as well have an Easter egg aisle too, or perhaps we should just have supermarkets completely devoted to all the celebratory, themed, festive occasions and be done with it.

The thing I liked about Christmas was, a few weeks leading up to it, the decorations would appear, Christmas music would begin to filter into our soundscape, and one really got the sense that the rest of the year could be put behind us and left where it was. But two and a half months of Christmas run up? I think that’s too much. I think a month run up to Halloween is a bit much.

Personally, I don’t subscribe to these periods per se, as in I enjoy them for my own reasons alone, but I do my bit for others who embrace them more heartedly, and I fully encourage people to take joy in their celebrations, but the way we are going we’ll be celebrating periods when we are not celebrating periods.

What do other people think? 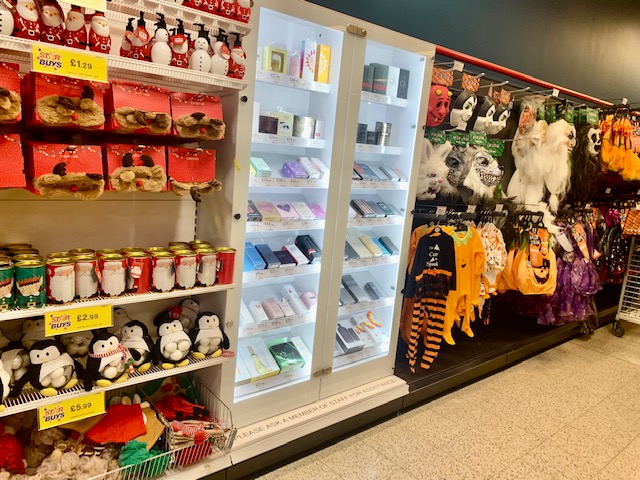 @Rups well done on pushing through your shopping trip. Hope you don’t suffer too much for it.
We do seem to be “celebrating” Christmas & other events earlier each year. By the time the events arrive we’re all usually fed up of it all. Having said that I do tend to spread my Christmas shopping out over a few months

Rups. The first time I went to a supermarket after my big stroke I was frightened to death. People were moving so quickly and few showed much consideration tothe disabled. I learnt to stand still when people rush past and to approach the end of an aisle as if approaching a main road. Like you, I derive some comfort from seeing other disabled people there, because some are far worse than me.

I loatheHalloween, as it is now yet another commercial festival. In my childhood it had little importance. Christmas, nowadays, is usually spent on a holiday break. Its religious significance has long gone. It is atheist worst of commercial festivals.

Oh @John_Jeff_Maynard, today, the trip was vile because it was also a supermarket I had only visited once before, so relatively new territory. All the products started to jumble together, and the floor had laminated tiles. Tiles exacerbate my symptoms because of the patterning. I have convergence-accommodation reflex issues, which means my eyes struggle to focus and then land on an object while moving, thus you can imagine how disturbing all the products are on the shelves.

I sit out Halloween, my partner gets involved with my children and makes it fun for them. So much cheap plastic tat, wouldn’t be so bad if well-made items were purchased and kept for each occasion, but we seem to be restocking every year. I don’t know where it all goes.

What I enjoy about Christmas is the music. I enjoy singing Christmas carols and popular Christmas hits throughout the festive season. A jolly Christmas film is always fun too.

Diolch @Mrs5K, I do the same, slow Christmas present shopping. Indeed, I have a box I use for stuff I pick up during the year especially for Christmas.

@Rups it’s not just me then

It is the third of October, Halloween is on the 31st, and Christmas not until late December. Thus, what is it? Halloween or Christmas? I thought they may as well have an Easter egg aisle too, or perhaps we should just have supermarkets completely devoted to all the celebratory, themed, festive occasions and be done with it.

This idea that supermarkets have of putting Christmas displays out so soon causes me great distress. I always write a shopping list out in the order of where I will find the list items. This way I get round the supermarket on a pre-planned route with the minimum amount of physical exertion.
To my annoyance they had moved some of my regular list items to other areas so that they could put out Christmas stuff when I went today. That meant I had to spend alot more time and physical effort to find my list items. I am always fatigued when I get home but today I was extremely fatigued.
I did hear a few other folks mumbling about the chaos and wandering around in circles but do the supermarkets listen? mmmmm?

Well done Rups, doesn’t sound as if the shopping trip was all fun but you persevered and got through it.

Shops have extended the shopping/buying period for all celebration periods now to make a profit, as soon as Christmas is over the Easter eggs and Valentine gifts are in stock to buy.

Even on the TV there is a channel that changes to Christmas in July, then again it’s Christmas films from October to end of December 🥹

The young ones expect Hallowe’en now, it wasn’t much here when I was younger, though I think in America it was always a bigger deal.

Alas we simply have to go with the flow.

Tiles exacerbate my symptoms because of the patterning. I have convergence-accommodation reflex issues, which means my eyes struggle to focus and then land on an object while moving,

Thankyou for sharing this. I get confused by patterning on tiles and floorcoverings and I can feel dizzy and my coordination is affected. I have always thought it was attributed to my stroke but I have never heard what the technical term for it is. People look at me and wonder why I am frozen to the spot.

@sunnyday, the sequential list is a brilliant idea. I went and hid in the shampoo aisle while my partner disappeared into the Christmas and Halloween section.

We have tiles in our kitchen, that space still is a nightmare for me to navigate comfortably around.

as soon as Christmas is over the Easter eggs and Valentine gifts are in stock to buy.

I can’t keep up @Mahoney, I might just sit on a rock and watch the flow go past me

Visiting shops, garden centres any where there is a colour display and bright lights stirs me up. Loved books and browsing in bookshops use to be a big highlight. Recently on trip out could not face shopping but agreed to go to bookshop where they sell fantastic arty birthday cards and purchase a few. On entering was overwhelmed and seriously churned up. to much visual stimulation and with dodgy vision like Rup all to much couldn’t cope so went outside. but after having a coffee and summoning up the inner Viking returned and bought cards but gazing round shop again got to me and had to beat a hastily retreat .Thought it was just a bad day but other ventures out an about have told me I should go gently. A harmless visit to a local National Trust property was going well until I spotted room full of second hand books for sale, Yipee started to read titles and head started spinning all too much retreated to far off bench in shrubbery. At home still have enough books for my lifetime . Yet chums from my stroke group can get out and about shopping and don’t have these issues. I can cope with village store and farm shop and even ventured to theatre but unexpectedly take by surprise now and again

@Pds this so resonates with me. I don’t have visual issues anymore like you but I find the whole hustle bustle exhausting. I used to love books & book shops but for now I can’t do them. Hopefully for us all these issues will improve.

Well, I don’t like shopping anyway, never have, so usually get weekly deliveries unless I have to go for a quick emergency buy …yes, shops do start thinking about things far too early … but then again it means very little to me as I do not follow or believe in the main beliefs as I am Pagan/Wiccan , so Samhain/your Halloween is the one day of the year when this old witch can smile and be myself at least for 1 year … the festivities have little to do with this pagan celebration, same as xmas and Easter which were pagan celebrations stolen by christians… I think shops need to buy and stock up early for these times, and if folk didn’t go buy this mostly tatt stuff then they wouldn’t stock it soo early … round here where I live we already have fireworks which always …seem to carry on until new year … I had (to date at least) 10 TIAs and 2 brain bleeds … just hope every day I won’t get another …I got very little help from doctors etc, never ever saw a consultant, or kept in hospital, just sent home… so thank goodness for this group where I have found out lots of things … blessed be all of you whatever your beliefs xx…

Hi @Ismeval you are very welcome here. Always feel free to say what you have to say, ask what you need to ask. There are folks here very willing to listen and happy to help where they can.

keep on keepin’ on.

Ismeva Des and all you who have different beliefs I remember a song from swinging sixties
“ if I had my way I would fill a hall and tell all the people tear downs the walls that stops you from being apart of it all because you’ve got to be one with The One and All”Think all beliefs are walls. Want confirmation ? Read Stroke Survivor and Brain scientist Jill Bolte Taylor PHD Book. ‘A Stroke of ’Insight’ made perfect sense to me. Amen

Do you remember what the song is Rups?

That will be @Pds whom you are asking. I mostly only remember mondegreens

It was a Hippie American folk singer I had a crush on. Melanie. Other songs were, look what they’re done to my song ma and Brand new Key which the Wurzels made a Somerset classic Of.