It is around 6 months since I had my stroke, I have been right side weakened.

Today I took part in a discussion about stroke survivors in the kitchen.
There is going to be a stroke association video covering matters to do with food and those affected by stroke.
I had to admit to not having been in the kitchen apart from a couple of times to boil a kettle for a brew.
I decided I was going to change this and declared I would make some scones when the discussion was over.
So here is the recipe and some photos to prove I had been there.

230g self raising flour
half tsp salt
45g margerine
1tbs sugar
2tbs currants or sultanas
one egg, beaten with milk to make 150ml (a little put aside for the tops)

Mix the flour and salt in a basin and rub in the margerine with finger tips.
Mix in the sugar and currants.
Stir in with a knife the beaten egg and milk, sufficient to make a soft dough.
Knead lightly.
Roll out to about half an inch thickness and cut with a 2.5in cutter.
Place on a greased baking sheet and brush tops with the remaining egg mixture.
Bake in a hot oven (200°C) for about 10 minutes.

Plain scones can be made as above, omitting the sugar, fruit and egg.

Here’s pictures, taken by Hilary, my Mrs. I wish I could offer them around. Half of the pleasure of baking is sharing. 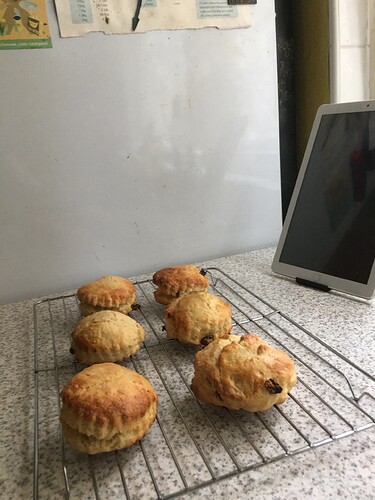 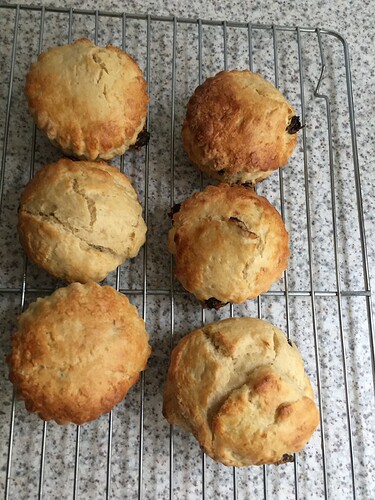 If anyone is interested in easy recipes to try out I have one for tomato soup and another for mushroom soup . . .

Maybe I could cover those too.

Well done on your achievement. Couldn’t have been easy but they definitely look scrummy

They look really tasty @Bobbi , I haven’t had my tea yet so the thought of a scone with jam and clotted cream is making my mouth water!

Evening @Bobbi. Wish I was there… but you would be a scone short. Well done, nothing like some home baking, tastes so good and the house smells amazing

@Bobbi wowser well done you and thanks for the recipe. I bet your kitchen smelt amazing.

I’m glad you joined the stroke association chat about SS in the kitchen. It’s very inspirational as we’ve been with you every step of the way. You have come such a long way in 6 months and still improving. I’m with @Ingo66 my mouth is watering thinking of the scones a blob of jam and cup of tea. Have a great weekend best wishes. Loraine

Well done Bobbi.when I resumed baking I broke the task down into various parts. I then did the tasks one at a time with a rest in between. The result was successful. I treated myself to a new hand whisk and food processor and can now cook and bake almost anything. I mostly use one hand, but I get there. I can even make pork pies.

how do you copy and save as my cakes dont always turn out, bread maker in loft. only used once, since i moved here

@tricia3 click and drag across to select then choose copy.
Open a simple notepad type application and paste in there.
Save it as a text file with a name you chose.

You can make a simple loaf using the instruction book with your bread maker.
You can make pizza dough and make up your own pizzas.
There is usually a recipe for a fruit loaf with your instructions, worth a try too.
If you are feeling adventurous make up some bread dough, cut it into four pieces, put it on a baking tray and bake off in the oven to get tasty bread rolls.

You know, writing this has made me feel inspired and motivated. I might just get back in the kitchen and give it a try.

done it. saved it to comm

@John_Jeff_Maynard Oh I do like a nice pork pie. Serve it with a boiled egg, a mix of salad, bread and butter and you have a nice summer tea. Followed by scones, of course

not today, i am too tired at moment as i over done it friday and caused b to up.it frightened me

@tricia3 I completely understand, you did well to get the copy and paste done.

I too am just laying back and leafing through the Forum, just gentle stuff. I’ll be climbing on my bed in a minute and grabbing an hour of healing siesta before our tea (prepared again today by my ever supportive wife Hilary) then followed by a little TV watching

thats what i should do as bp has gone up. its nearly three months since stroke

You definitely need to look after your BP. I have had the dreaded fatigue today, hit me like a brick, so have spent the day resting on the sofa. Never be afraid to rest. Brain injuries need lots of rest to help them recover.

had my stroke three months ago. feel so tired, i did stop bp tablet 10 days as it caused me to cought, so went back on lostatin, its side efffects i dont like

@tricia3 hi Tricia I was the same in these BP tablets I coughed a lot and it would wake me. I’m now on a new BP tablet called Clonidine and I’m much better. Maybe ask your GP to review your BP medication. Kind regards Loraine

i am going to docs today, i went back on lostartin, but feel rough today in town, hubbypicked me up