After some time spent researching and experimenting since I offered to present instructions for making your own sourdough bread I have arrived at a very disappointing conclusion.

The hard fact is that producing a sourdough starter and using it to make loaves needs temperatures around 25°C - 28°C. Writers of books about sourdough and online instructors who make it sound so easy are people who live with an ambient temperature at or certainly close to those temperatures.

Here in the UK there is a brief window during summer when those conditions are possible. For the rest of the year any attempt is going to lead to difficulty, failure and frustration.

Having said that it is possible to achieve the necessary conditions if you have the appropriate equipment. There is an American bread proofer that costs about £190,(I just checked on Amazon - they are now £315 pounds) or it is possible to DIY something very much cheaper for between £10 and £60.
I won’t go into details because I don’t think anyone tempted to give sourdough a try would be prepared to spend that much or to go to that trouble to make equipment to just give sourdough a try.

Just to explain my position, I used to regularly brew my own beer, which needs temperature adjustment to brew all year round, so having this means I can create a sourdough loaf without difficulty. I now realise after the experiments I mentioned earlier that the process is virtually impossible in an ordinary UK kitchen without extra apparatus. Just like carpentry requires a set of tools, so sourdough in the UK needs its own equipment to regulate temperature.

I was keen to enable others to enjoy catching the wild bacteria and yeast then using it to make bread but now I must report that I am unable to share instruction useful for use here in the UK, it just isn’t warm enough.

I will continue to post about cookery and baking from time to time.
You can’t keep a good man down ! !

Keep on keepin’ on

@Mahoney Thanks, I did try and try, before I realised I was not going to make any headway. I am gutted but resigned, it must be so.

@Rups Sourdough is deceptively uncomplicated. It is all about flour which, to make bread, needs to be wet and warm. It is as simple as that.

It (bread making) has been going on all over the world for at least tens of thousands of years, I’m no historian but perhaps even hundreds of thousands. It is one of the initial building blocks that created civilisations, again, for many ages and worldwide.

In colder climes the material for bread making, water and flour, would have been kept in a warm place. Probably something like an ingle nook in one of the large fireplaces that were common in the ordinary cottage-type dwelling. Holding the required temperature would not be difficult in such a set up.

It is ‘modern’ living which has stripped us of the independence that was once normal, making us reliant on the system to supply us with food, water, energy and so on. Quite obviously there is a weakness here that could leave us all sorely tested. Equally, apart from individuals trying to sort it out for themselves, there seems to be no corporate or system wide insurance against possible difficulty.

Oh dear, oh dear, I started out talking about bread and ended up on the subject of disaster.

Somewhere in the Bible there is a story about an Egyptian pharoah who had a dream about disaster. He decided it might be wise to stockpile some grain for the people as an insurance against any unforseen difficulties.

On subject of baking, this time tatties .Chum said to me do you know you can bake potatoes on top of a wood stove as well as in one. Have done the in,wrapped in foil and put in hot ashes Boy Scout stuff.But on ? It appears you can buy cast iron bakers you just stick on top.Chum said stick your spuds on aluminium baking spikes put on top and cover with biscuit tin, your own oven. So today have to make my own lunch, thought I’d give it a try and do my bit to save planet Earth Now I thinks wouldn’t a thick terracotta pot be better ?
Can’t find baking spikes so stick a bit of metal through it, don’t wrap in foil or prick it over with fork or smear in oil. Put on stove cover with pot, block drainage hole to retain heat .All set 10:20 am , 3:20pm check, almost there so cut in half and put directly on stove on square of foil 15mins perfecto. Chunk of Stilton and chopped spring onion job done. Just a little tweaking here and there and I’ll be there.Our move to this bungalow was a saga you could write a book about, was very tough but so glad We made effort to bring all our fire wood .
Baking a Bramley apple should be child’s play !

I mentioned how flour and water have been used to make bread since pre-historic times.

I neglected to mention bread’s partner, also made by putting flour and water together, the venerable beer, a truly ancient drink.

Beer and bread have been at the root of every civilisation. They were symbols of prosperity, plenty, co-operation, civilisation and advancement. Beer and bread created history. They are an essential part of our shared existence.

The earliest tools were probably stones to grind flour and pots for fermenting that flour into beer and bread.

Enough history, though.
I am only sorry I could not give you the opportunity to try making your own beer and bread.

Keep on keepin’ on.

Morning @Bobbi. This has been a welcome lesson in all things yeasty. I could remember how to do it but had forgotten much of the theory so thank you. Keep on baking! This thread has prompted me to reread Paul Hollywood’s bread book and the sourdough section which is how I made my sourdough. It does recommend 20-24 C for production of the starter. It’s a good book for lots of breads, but I like Gino D’Acampos focaccia recipe with just some simple rosemary. Guess what I’ll be doing today​:grin:

I use instant yeast and a mixture of mixed grain and strong white bread flour. I wouldn’t have the patience to try sourdough. I’ve got a loaf on the go now.

Hi @JuliaH I’m sure your focaccia will be proper tasty. Pity we can’t leave a few slices of our preparations here on the Forum for folk to sample. A picture is worth a thousand words, so how about a picture of the treasure you are baking today? (that goes for anyone else inspired right now too)
If you are into following other bakers here’s a name to hunt for. Dan Lepard. He’s an Australian and he has a lot to offer in terms of both technique and recipes. He is a reknowned baker. He has written many books too. I have learnt much reading through his stuff. Here’s a link that will give you an introduction to him and his work:
Dan Lepard introduction
(follow that link you won’t regret it)

@John_Jeff_Maynard I bet that mixed grain gives it great taste and texture. Do you use a bread machine? I bought a small one from Lakeland then a bigger one because I wanted a larger loaf. Both get used though. I frequently use the smaller one to mix a simple dough which I use to make naan bread slathered in home made garlic butter and cooked off in a cast iron frying pan on the stove top. Nice with soups and stews.
I have to admit since the stroke my kitchen time has been curtailed and now requires an effort, regardless I do enjoy playing at being an amateur chef.

After my stroke I bought a food processor with dough hooks. It does most of the kneading for me. I then knead dough for a few minutes with my good hand. Loaf now rising in oven. Will bake it in 20 mins.

@John_Jeff_Maynard
If possible you must post a photo, I’d prefer an actual slice with butter on, but a picture will have to do . . . 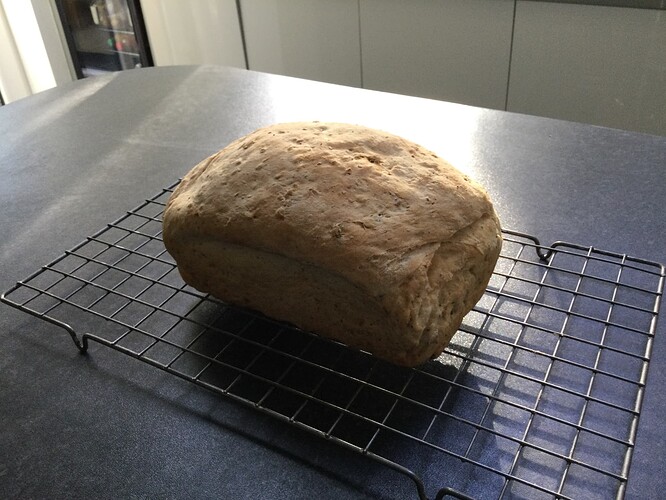 I use 200 gram mixed seed bread flour, 145 strong white, 1 sachet of instant yeast and 1 level tablespoon of sugar. I put a glug of olive oil in mixing bowl and add 200 ml water heated for 30 seconds in microwave. I tip in the flour add salt and mix with dough hooks for 6 mins then hand knead for two mins. I leave for an hour in a warm place, then heat oven on 50 for five minutes. I oil the bread tin, knead dough into shape, put in tin and brush with olive oil. I put straight in the warm oven for an hour till risen then turn oven on to 200 and bake for 34 mins.

If I give you my address, will you stick a stamp on it and post it to me?

Looks very nice John and that mix will make a tasty loaf I bet.

@John_Jeff_Maynard
It just wouldn’t get this far, the postman would have beat me to it. It does look good.
Thanks for letting us see the photo.

That’s how the posties earn a crust.

That’s how the posties earn a crust.

crumbs, who would a thought it,
o dear, o dear