Had a stroke last October - luckily no major physical impact, and have changed my diet etc. But finding it really difficult to give up smoking… any tips?

@welcome to our forum and I’m sorry you had a stroke.

Good news you’ve changed your diet and stopped smoking, I didn’t smoke so maybe someone might be able to support you on here. keep going best wishes Loraine.

It is twenty years ago, but when I had a heart attack I stopped smoking immediately. I used Nicorette Microtabs as a substitute. One tab produces a hit almost instantly like a cigarette. In company with other smokers I would slip one of the tiny tablets under my tongue almost immediately stopping the craving. They became a regular item on the shopping list. My doctor told me not to stop taking them as they were infinitely preferrable to cigarettes from a health stand point.
Of course I still had the addiction to nicotine which meant I was unable to quit them.
Then one day I was admitted to hospital, I had no visitors and did not have any nicotine tabs with me. This forced me to go ‘cold turkey’ for a week. When I left hospital I resolved to not return to the habit. Somewhere in the house there is an old packet of those tablets, but they have not been touched since, maybe ten years.

The smell of a lit cigarette was attractive for many years but I managed to keep off the nicotine.
It is strange to think that what once had such an alluring odour now smells, no stinks, repulsive.

I do occasionally have a sensation similar to a craving and think it might be the remnants of that addiction but in no way will I be ever tempted into that again.

Work at it Rob, you can do it.

I found this link, these are what I was referring to above: 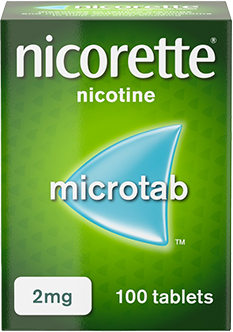 Thanks Bobbi, very helpful. Tried vapes but didn’t really work, I’ll have a go with the MicroTabs

I’m no longer aware of how much it costs in cash to smoke, but back in the day one tablet was about the same price as a cigarette. If I’m not mistaken these tabs are now much cheaper, but it is more how well they work as a substitute that was the reason I used them. Just use one microtab when you would smoke a cigarette and the craving is satisfied.
You could also try to taper off the number you use, but I’d just concentrate on satifying the craving and completely stopping smoking for a start.

All the best, buddy.
this forum is full of information, sympathetic and knowlegeable people, it is always okay to ask if there is something you want to find out.

Hi @RobFulton, so sorry to hear re your Stroke and your challenge giving up smoking. When I was a Therapist (not professional advice coming up btw!

) I suggested to those who were desperate to give up smoking/alcohol or whatever, to simply put an elastic band around your wrist, not too tight.

the elastic band. Ok it does give momentary pinch of pain, but after a while your brain associates the thought with with pain, and cancels the craving.So, not medical advice, just a suggestion, … let me know how you got on

I had an ischaemic stroke Jan 10th 22, I now have a left side infract and although walk and talk with no issues, my stroke has caused me many problems.
I was a smoker from the age of 18, 30 years daily and stopped eight days after my stroke.

I used 11mg nicorette chewing gum, you chew it for a moment and then push it between your gum and jowl and it releases nicotine through the super absorbent gum and into your blood stream, satisfying the need for nicotine quickly.
Your brain is wired hard now for nicotine, somehwere in it there’s receptors, which look and behave like empty cups, once the nicotine enters your blood and passes over the cup, it fills it, quenching their wanting, in effect dropping the nictine molecule into the cup like a ball, and when this happens, you’re good for a bit. You can read about this mechanism online, it helped me to understand physiologically what was going on.
The chewing gum will do the same thing but obvs without the smoking. Smoking crosses the blood brain barrier, BBB, polluting your blood and satisfying your craving within seven seconds, whilst it’s polluting you, it’s also undoing any antiplatelet medication you are taking, one cigarette makes your red blodd cells 100% more sticky than they were before you smoked it, in effect if you take clopidogrel or aspirin at 8.00am and then smoke at 8.30 or 9.00am you have undone all of your anti platelet therapy in seven secnds and this extra stickness from smoking last about 45 mins to an hour before subsiding, but the next cigarette will again make you blood sticky and negate your anti platelet therapy.

I always said that it would take something very drastic to stop me smoking, and boy was I right, as challenging as stopping was, the anxiety of knowing that every single puff on a ciggy was making my blood 100% more sticky, and 100% more likely to clot going past the stenosis that caused the clot that caused my stroke was enough to outweigh my desire to carry on, the other factor was how much I has seemingly got away with it. Stroke is the number one reason for adult disability, have a read of a few stories on here and there’s people who haven’t been upstairs in their house since their stroke, now use a comode, no longer drive, walk with a frame and are incontinent. You and I are among the very very few lucky ones to have had such a serious incursion into our brains and got away with it by some miracle. The idea of disabling myself for life was enough to make me stop.

We are falable as human beings, expect to fail, on the scale of addiction, smoking is 2.82/3, second only to Heroin 2.82/3, and in first place Crack Cocaine 2.86/3, giving up nicotine is as hard as giving up smack, it’s the third most addictive substance known to man. I fell off three times, once after about ten days, once after about 30 days and once after about 5 months, because I’m human and quitting is a battle. I now haven’t smoked in 134 days and counting, but in total are 300+ days without smoking since my stroke.

The NHS do a very good quit smokin app which counts your streak. and helps you if you fall off to get back to it.

The chewing gum solved my nicotine craving, the anxiety of knowing I was doing the most stupid thing imaginable by smoking after a stroke reinforced my need, and the app gave me somewhere to go to and be rewarded. The first month is the hardest, which is why counting that streak helps, giving up a 17, 22, 27, 31 day success only to have to start over again helped me to beat the craving and add to that number and not waste it by going back to the beginning and what also helped me was knowing medically, what the cigarette was doing to my blood, how dangerous that was and selfishly, have fortunate I had being to not have suffered some of the life changing disabilities many stroke victims do. You could lose everything you have, for one hit from a ciggie, it’s truly not worth it, and your bady has already given you one very very big warning.

I wish you luck, and trust me, it’s great on the other side, you smell amazing, you can smell things and when you see someone lighting up, as much as you might yearn for that old friend, you know that they are addicted and in danger by learning what smoking does to their blood every time they do. I can smell people smoking, driving in cars 100yds away on the road that runs past my nursery, and I do Yogi bear the scent…and then go and drink some water and eat an apple.

Stick at it, let it dominate your every thought as it will, until the day it eases, and then double down on it hard, and beat it please, before it does something to you that can’t be fixed or undone.

All the best, and the very best of wills to you.
Alan.

ohh and avoid vaping at all costs, it also affects any anti platelet therapy that you’re taking and is as addictive as smoking, it will not serve you well at all as is nothing more than like changing heroin for methadone. 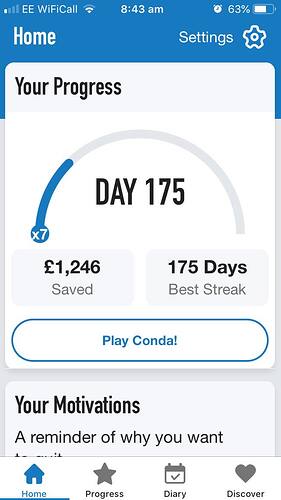 You could also try Snus as a cessation, it is now readily available in UK stores, it can also be ordered, cheaper, online from Sweden. It’s a tobacco free nicotine pouch that is placed under the lip and comes in many different strengths and flavours. Very popular in Northern Europe. My stroke consultant uses the Microtabs that @Bobbi has mentioned, but if you are or were a heavy smoker, Snus has a range of nicotine content that can be applied to the level of nicotine craving you have.

Thanks for the detailed message! Some strong messages in there, but has made me think. Thanks for this, much appreciated

I am going to write something, despite the “strong” messages I’ve already shared.

To stop, you just stop, you don’t prepare or slow down or cut down, stopping means just that, the cessation of smoking, stop quickly, have nicotine supplements to hand, but bin all the tobacco, the pull is far to great to have any around. I tried holding on to that last half a pouch and obvs ended up deep in it as soon as my will was tested. Stopping means just that, stopping. Stop, singular, the end…

In the hospital on the stroke ward I had two other gentleman either side of me, I’m still haunted by them both in some way. They both had been savaged by their stroke, shi*ting up their own backs, motionless and trapped inside their disabled bodies I listened as the nursers measured out the tubes by which they would be fed, 61 and 66 cm’s respectively, their strokes had destroyed their swallow reflex, they were being measured from their mouths to their guts, awake, paralysed, conscious inside and motionless. I couldn’t look them in their eyes as I walked around the stroke ward with no realisation how close I’d come to that being me.
It was only when I got home that it hit me, I lashed and screamed back against my own impediments caused by my clot and then I came here and still do, read stories every week of new people who’s entire lifes and families are being torn apart forever by theirs or their partners, fathers, mothers stroke and sometimes I look away still, because I can’t bring myself to read their losses and begin to understand what lies ahead for them and those they love.

My friend Claire was an acute stroke nurse, she quit post pandemic and walked away after 20 years of frontlining stroke care…she sat in my nursery one day in May, when I’d had a relapse and was back smoking…her exact words were…

“you’re a fooooking idiot, and you will have another stroke if you don’t stop smoking”

Be good Rob, you have best thoughts going forward, stop, for everyone you love and everyone that loves you.

@RobFulton you’ve received lots of helpful suggestions, you can do it!

Here’s to your smoke free future

Hi ,try loads of different vapes to see which works for you, if I can do it anyone can good luck