What music inspires you post-stroke. This is my first recommendation because I am an Aussie. Thunder Struck.

I find most music relaxing and listen most days to radio, Classic and Smooth. Lilian

I’ve always been a classical music fan. I do like musical theatre too but am also an Ed Sheehan, Calum Scott, Beautiful South fan.

If it’s music then I tend to enjoy it…….with the exception of jazz

My favourite too. My claim to fame is that I went to Download Festival, on my own, to see them (pre stroke).

I like the Beatles–like to play it with my ukulele and sing along. Also, harmonica, is very cheerful and upbeat. You can feel depressed listening to the harmonica.

We listen to a radio station called ‘Magic’ here in NZ. it plays all the top songs of the past many of which are dreadful and should be confined to the rubbish bin. Unfortunately it is the best station around for us oldies. I’d rather listen to the Concert programme but being the only serious musician in the house I do not have the right to retune the radio!
Deigh

Mostly, I listen to medieval music and comedy songs from the likes of Monty Python and The Goodies, and at night drone & drift sci-fi ambience. When I shower, I always listen to something lively whether it’s ACDC, Cat Stevens, Ian Dury, Grace Jones … the reason for this is because shower time is when my thoughts can get messy, so something to belt out some vocals to has its benefits. I listen to Classic FM every morning, it’s my alarm clock. I listen to Gregorian Chants when cooking. And just the sounds of nature when gardening.

Before stroke, I rarely listened to music. Now, it has become essential in recovery. Good lung exercise too for laboured breathing, although I can’t hold a tune

I have a wide and varied selection of music I listen to.
I like most things except jazz and rap, although saying that I’m currently listening to KLF, and there is some rapping in it, although I don’t class it as rap music.
Last music binge before that was the Dubliners (told you it was wide and varied)

I am enjoying classical music more since my stroke - just as well as he who holds the rights to tuning the radio on is a big fan of Radio 3 which wakes us every morning. Can’t hold a tune really and find that my singing is even worse since the Stroke , maybe because of breath control, but I do like to sing along to The Beatles, Martyn Joseph or other 70s to 90s stuff if I’m on my own and no one else will hear

I went and saw Adam Ant in concert recently, taking my twenty-two year old son with me. It was the first time I have been to a live performance event since stroke. Adam Ant is sixty-seven and my son was the youngest person at the concert, it seemed. There were even people with walking aides. It was a lovely experience. 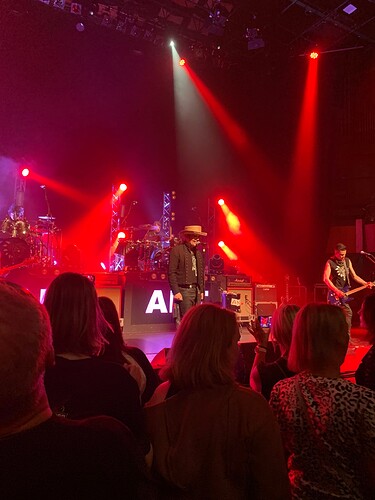 Sounds great Rups, so pleased you both enjoyed yourselves. Hope he sang all your favs. I’m a little jealous

Grace Jones will be next if she does a solo show. I was quite nervous of the whole trip as had to stay in a hotel. It was such a civilised concert. Adam played all the songs I wanted him to. There were many men who had obviously taken their partners but were not Adam Ant fans themselves. That was sweet. From a stroke perspective, I forgot for an hour and a half I had had a stroke. I danced, on the spot, for almost that long but was wearing thin towards the end of the set. I cheered and shouted a lot, no impulse control, so I was like a grey-haired teenager.

I must add that it was mostly having my eldest boy with me that I felt safe. We are not only father and son but also good mates. 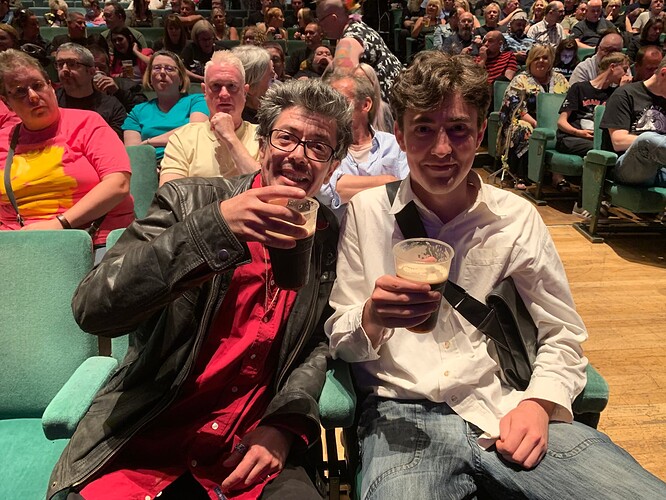 I cheered and shouted a lot, no impulse control, so I was like a grey-haired teenager.

Fantastic, life is for living, enjoy every moment that you can, wherever you can.

Your son sounds a loving caring person, I’m pleased he gave you the confidence you needed to make the trip.

Hopefully the Grace Jones concert is just around the corner

Haha glad you are getting out to these events, although I don’t share your taste in music

Haven’t played records since 1980’s was always far to busy. Just listened now and again to-music on radio4 or classicFm. Attended the odd folk festival. Recovering from the Stroking music was suggested. Son set my iPad up with Spotify ( me being the Luddite King) set me up with British folk, a disaster! Sailors being lost at sea, sweethearts pining away, soldiers losing limbs, young love ending in sorrow.gave up and switched to classical mood music.Helped me get through first few weeks but bizarrely lost nearly all interest now .Have been taken out to live folk evenings but can’t cope with trying to take in lyrics so just instrumental. Can’t motivate myself to even turn on radio most days yet use to be an avid Radio 4 fan, on from dawn till dusk. Hope this strange period passes and can get back to some form of normality

Excellent photo! I LOVED Adam and the Ants at Uni, those were the days…weirdly the stroke I had seems to have wiped out

names of Artists from the 80’s, my favourite era. I do like other types of music too, but for me … the 80’s were an extremely creative time. I was also into ‘The Stranglers’ … not as drastic as that sounds but hey, I was a Student. I also love listening to my ‘White Noise’ machine …. So calming. I suppose thinking about it any music from year dot, up to the end of the 80’s I love, but not much from then on. Maybe ‘One Direction’ … only joking!! … or am I?? I recommend Nigel Shaw’s beautiful music, wooden flutes. I relate to chanting music (Buddhist Monk Type) too, and sounds of nature. And anything groundbreaking really. Why are you the only two drinking eh?

Love 80’s music especially a bit if electro. Great to see many of the 80’s artists still touring and doing well. I’m going to see Squeeze next month.