Here’s a question - if you have full left or right side immobility, and need help to get dressed, get from bed to chair etc, what is the best car to be able to get in and out of?

I mean we want to do trips out. Put a wheelchair in the boot and travel. 5 months post bad stroke.

Is it easier to transfer from wheelchair to a low car, or a higher one (SUV, 4x4 etc).

Any advice or tips how to make it easier?

Shwmae @dingalingalong, I am not much of a car person but from experience the best car for my elderly mother-in-law to get in and out of has been the Toyota Yarris because the seats are high enough to allow ease of entry and exit. The doors are also wide, so there is plenty of room to get in and out. Hope this helps.

Look at the Ricability(RIDC) website. They have a database of cars based on criteria such as ease of access, loading/unloading wheelchairs, legroom, headroom. The database includes measurements for lots of cars.

Before my hospital discharge, I was taught how to get into a car. Basically, you stand by the open door, hold the top of the door with your working hand, shuffle sideways,then lower yourself in.

Yes, this makes sense and I have seen this method. It means it won’t work for a 4x4 type arrangement because the seat is just too high up.
Similarly, you don’t want too low a car seat either.

Well an update. Big step forward this week. I escaped the care home with my Brother in a wheelchair (care home are great btw) and we managed to transition from that chair into 4x4, in pretty much one attempt. Mainly with my brother standing, leaning against the car and seat, and pulling up on the grab handle on the roof to get bum on seat. Then swivel right leg in and lift the left. First time in a car for 6 months.

We took a trip, stopped at a pub by the river and had a pint watching the boats! (in the car). Felt good to be out and about.

The reverse transition from high car seat to wheelchair was a little harder, because he has to swivel 90 degrees before sitting down into the wheelchair, and with a dead left leg and a weaker right leg, that was tricky.
But he was so pleased and it gives extra dimension to being able to get around.

I thought I would share because I read many posts from people here and they have progressed a bit faster, or weren’t so severely affected (in this way at least). Every step is important. 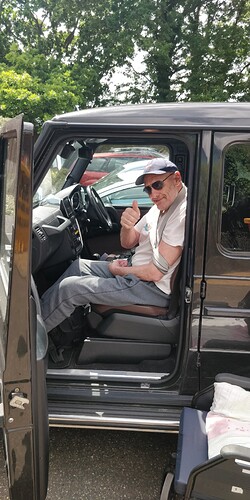 Yes @dingalingalong every step forward is important, so pleased you both enjoyed your day out

@dingalingalong well done on your trip out. So pleased for you. It must have been a tonic for you especially the pint

Fantastic. It’s good to break up routine and just enjoy things as they are.