Nonsense, or, passing thoughts from a stroked mind

It has been remarked that in pre-historic times when men lived in caves and drew pictures on the walls that not much ever got written down because no-one really cared enough to comment.
It was a time when hen’s teeth were a common and plentiful occurrence.

In those days, it is believed, aliens visited our planet on a regular basis to pick up the teeth. In return these same aliens eventually taught us how to extract iron from rocks and how to use the metal to make swords so we could kill one another better.

Hen’s teeth began to be a more rare discovery, aliens lost interest in planet earth and their visits all but stopped.
More recently an alien, lost or perhaps hoping for a return to the old days, happened by planet earth where using swords to bash one another has now all but died out.

In passing the alien dropped hints about a new metal and a new weapon far surpassing earlier examples. This new metal could be used to make a weapon that would kill 100 thousand humans with one blow. Obviously a great improvement on what had been available before. Collecting uranium became our next major goal.

In our modern age it has been generally agreed that the chance of finding a hen’s tooth is extremely unlikely. This means that aliens will very probably not visit again for a very long time, which is, perhaps, a good thing.

I think, maybe, that we have learned enough.

Nowadays, we note, very many people write things down but most of it is scarcely worth reading.

If anyone wants to fund my search for hens’ teeth, contributions will be very gratefully received.

If I can collect enough to attract an alien I’ll be asking what the hell aliens think they are doing, giving us all these dangerous toys to play wth.

@Bobbi a quick lesson in history

thank you for the smile

The other day I did receive an email from an alien offering an upgrade on previous weaponry. It nestled in my spam folder for some time.
For only a very few hen’s teeth the secret would be revealed. Something which at one stroke would eliminate half a Galaxy.
It is vital to ascertain in which half of the Galaxy you will be present before activating this very new technology, however.

Accidents have been known to happen.

thank you. You made me lol

Bobi have they changed your medication ? Your right about hens teeth have just Upended ended my four, and not a tooth in sight. But with you on alien’s having day trips here, it’s the only explanation for so many remarkable mysteries here on Earth. And no We don’t want you explaining it all to us. Be a good boy and stick to your proper pills.

Well O Bearded one always feel sorry for my wife having to put up with me but your Hillary must really suffer.last two weeks been a trial but have survived.Have a favour to ask could you cancel the fireworks you have arranged as it will put my hens off laying and wake my hibernating tortoise.

@Pds your posts make me smile

@Pds
Bear in mind, any sudden changes could spook the aliens.
Can I suggest, instead, raiding your wife’s kitchen and commandeering the kitchen foil?
A wrapping around the head with aluminium in two or three layers is said to be remarkably good at fending off negative influence.
So if you were to wrap the chicken and tortoise in this manner I suspect you would find that the evening would pass with next to no ill effects. Chickens would lay as usual and the tortoise would enjoy a relaxing and revitalizng snooze.
. . . and no more talk about nurse and medication, please. You are making me twitchy.

.
Have you been watching Saul? His brother wraps himself in foil too.

No worries, folks, just stand back, let me at the grease proof paper and cling film !!

Is this what they mean on the music channel when they are talking about rapping?
I understand now.

Anyhow, there’s no harm in the odd occasional slurp from the trifle sherry bottle, I tell you . . .

Keep on keepin’ on
hic

Others have remarked upon erratic behaviour and uncertainty about whether I have been taking sufficient medication.

I am beginning to wonder whether the stress and emotional pressure caused by leaving the Parkin wrapped, uncut and untasted for so many days is beginning to have an effect on my psyche.

It might be important that I take a peak at said cake and even venture to have a taste.

Here’s the Parkin (or half of it anyhow): 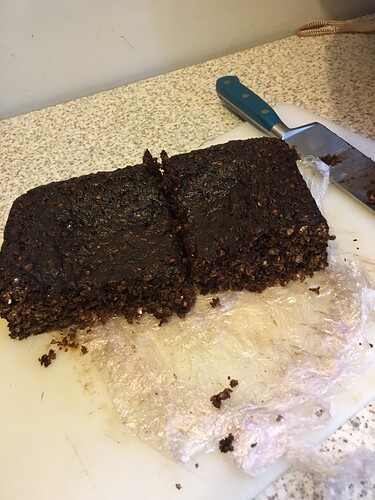 It is as evil looking, black and gooey as it looks.

It quietly creeps up on you and by the third piece you realise it tastes quite nice but that it isn’t going to last so long if you keep eating it like this.

It is for folks like myself who have a sweet tooth, no use at all for those frightened by sugar or by the thought of sugar, even.

. . . and as suggested elsewhere would be delicious with cream, ice cream, brandy sauce or such-like indulgences.

It won’t take long to get this eaten up.

My psychic disturbances are now thoroughly settled down, all cravings satisfied.

(My apologies to those of a softer disposition and with an aversion to the sweeter side of life, whom I might have disturbed by my culinary comments.)

Here’s a tiny piece on a plate: 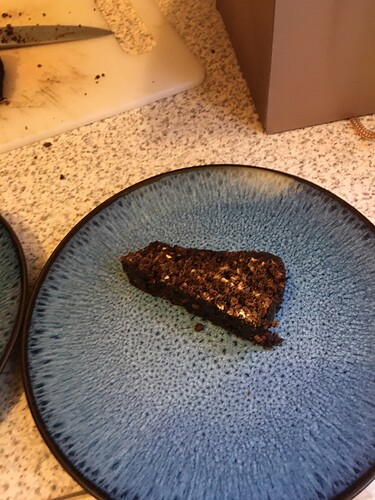 Did you eat it with anything or just as it came?

Sending loads of get well wishes to Hilary (@HHilary). May she be better very soon.

Happy new year to you both.

@Loshy I just ate it as it came, but I think custard, cream, or sauce would be very nice.

Yum @Bobbi is there any left?

@Loshy
Oh yes, but it is locked away in a vault where the undeserving cannot reach it.
Every so often on special occasions a portion will be withdrawn to be treated with the reverence it deserves.

Then again, might woof the lot down with cups of coffee over the next couple of days.

@Mrs5K @Loshy
many thanks for those get well wishes, much appreciated.