Stroke: bilateral multifocal cerebellar infarction plus six TIAs over three months prior. Date: September 5th 2020. I was lucky to survive, this stroke has a 1-2% mortality rate. I have not recovered even the slightest to how I would like to be. I am barely able to breathe when I am sitting in a relaxed position, I have constant dyspnoea , it feels like I am being submerged beneath water every hour of the day. I have been to only four places outside of my home in 2021. I gave up my license and car.I cannot see properly, I have to feel my way around my home as if I am completely blind, even though I can see where I am going. I have had a series of severe panic attacks that lasted several weeks over a period of two months where I was bedridden. I was fed in bed, basically, only seeing daylight when needing to visit the bathroom. The nystagmus and stereopsis is so chronic that turning my head produces disorientation although I might be standing still. I cannot bend down for the earth rushing up at me, and I walk like a gunslinger. The tinnitus roars in my head day and night I get nausea that is so severe I almost gag. But, I am a stroke survivor.

I have somehow, despite having no spiritual affiliations, or medical intervention, survived a rare stroke. I must be either lucky or a survivor. I take the latter. Like the incredible fungi network, somehow, I have moved forwards. Re-routed around the problem. My brain has kicked into gear and saved the rest of my body from defeat.

Every day is a set of challenges that I could, in my idle way, just give up the ghost and default to what is easiest for me at the time. However, life is full of intrigue. Wonderful things happen even in pain. I think it was Dostoevsky who said, “There is pleasure even in toothache.” I tend to disagree with him but I get what he was stabbing at. There are so many addictive, interesting things about life, it’s such a wonderfully, all encompassing miracle. As my father used to say, “how can one be bored, there’s just so much to do”.

Essentially, srtoke recovery is longterm for most, but it takes repetition and dedication. The neurones need to flash repetitively until they stay lit. Without repetition they fire up and then die down again, repeatedly,. I am not a medical professional, just someone with an interest in my condition and the desire to help others. My father was an aircraft technician in the RAF, my grandfather was a Wing Commander in the RAF, my great grandfather was a Major in WWI, and the rest of my family were either clergymen or military. Colonels and such in the Boer war, a fighting family. Part of The Royal Welsh Fusiliers too. Church and state. A pragmatic family and I feel I have that same decree.

Obviously, we have all suffered strokes. Each individual stroke will be different to each individual’s needs. The NHS has a limited amount of resources toward recovery (we only really have each other, and wayward scientists trying to rectify our predicament which they are doing to the best of their abilities). Britain has a limited amount of “media” toward recovery helping us to access easily. It’s okay to seek out “novel methods” to improve recovery from stroke as long as they aren’t medicinal - for instance, if you have an arm that is not responsive, bandage up your good arm. Or try the mirror box. Just try things repeatedly. There’s no magic formula. I managed to correct my gait by crawling on the floor for ten sequences at a time for over three months. It sounds bonkers but it helped me to stop shuffling.

You only get one go at this life, if you are happy with it as it is. So be it. If not, then it might be worthwhile to take a leap of faith, and try different things. I only say this because I believe stagnation produces quagmires. It’s a positive thing to keep alert and stimulated. I have included a picture of my cat Horace giving me a cuddle, in case, anyone has any doubt over my qualifications. 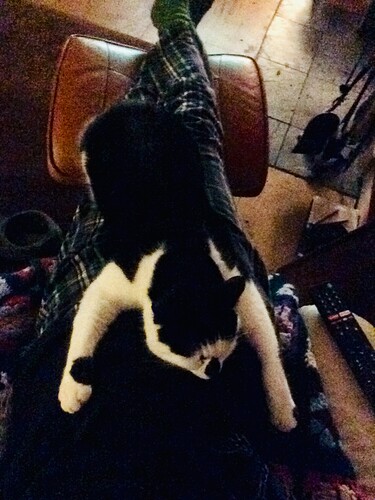 Thank you Rups. Yes, every stroke is different, but the words that jumped out at me are determination and repetition. I am blessed with a stubbornness that comes from the genes on my father’s side of the family. Throughout my life I have reacted to people’s limited expectations of me by never accepting their stereotype of me and pushing towards my own goals.I will follow advice provided I can see the benefits of so doing.

Recovery is slow, so repetition is inevitable. I go to a seniors exercise class three times a week. The exercises change monthly, but each class follows the same exercises. So three times a week I go through the same exercise routine, trying to put in an equal effort each time. I have improved over six years but now fall into the elderly category, not that that will stop me battling on. The worst thing you can do after a stroke is give up and vegetate. Thank you for your post.

Bless you Rups, onwards and upwards keep it up. You are an inspiration to us all. I love reading your posts. I hope 2022 will give you a better year. Sending positive thoughts and hugs.

Keep up the good work Rups, you are indeed a true survivor.

Hello @John_Jeff_Maynard, there is no guidebook for recovery just recommended exercises. I too have a stubborn streak, but I’ve always had a habit of slipping into lethargy if I feel aimless, and I persistently need to motivate myself every day. I like the phrase “waste time usefully”.

Thanks @Loshy, I get so exhausted by it all, I just have to keep on finding those beacons of light that can guide me to the next milestone. I have such a lack of discipline at times, I have to reinforce motivation every time I wake. I accept all positive thoughts and virtual hugs willingly

Thanks @Mahoney, when there’s very little else to lean on, one’s survival instinct is reassuring. This year is the year I want to face my fears. It’s been merciless at times as I have begun auditory biofeedback which means I have to put myself into situations where my symptoms are tested. This can be quite scary at times but I hope it will get easier as I practice.

I hope it gets easier for you too as you progress with the biofeedback, I think you’re very brave to confront your fears and try this therapy, it’s always easier to stay within one’s comfort zone, but progress and growth happens when you push the boundaries.

Wishing you all the very best