Don't have a stroke in Cornwall - admission by main consultant 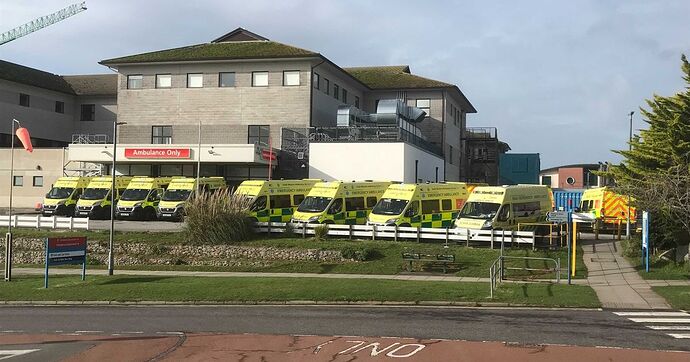 Doctor - 'it's better to have a stroke in Bristol than Cornwall'

The postcode lottery we all have to put up with for basic wellbeing is horrendously unjust. Bristol has a specialised stroke care unit too. I had to wait two and a half hours for paramedics, so my fate could well have been the same as that chap. For me, personally, even before stroke, the two most important community based conditions in life have always been the environment and health. These things should not just be a zeitgeist , they ought to be part of our standard, embedded community principles. It worries me that there is no firm plan for our healthcare system, and for those who contribute to it, whether they be patients or workers.

I think it’s the same in a lot of areas now. One of our neighbours had a stroke & the ambulance took over 4 hrs to arrive. He sadly died a couple of weeks later. I took myself, well hubby took me, to hospital as it was much quicker than waiting for an ambulance.
The NHS appears to be broken & not sure how theyee going to fix it

Terribly sad that someone who might have recovered did not get a chance, but this is a reminder that stroke is a killer. All of us here who survived are the lucky ones, although it is not always easy to remember that.
Janet

Where I live it’s like a War Zone in the NHS … across all areas. I waited 14 hours thru the night for an ambulance, that my GP requested as an emergency, suspected Stroke. Whole experience was so traumatic as I was on my own at that time. And Ive heard of people waiting longer! Sorry, I don’t mean to be all doom and gloom … I made an official complaint afterwards and received an apology amazingly …. Very important to log things like this, I feel, as if no one says anything then nothing will change. I now attend another Hospital for something else … complete contrast, brilliant Consultant and Department. … the difference being it’s out of the County I live in. Sigh.

The system appears broken in all areas of the UK.

As for Southmead hospital in Bristol they so say claim to have a specialist stroke unit! However, I totally disagree… they do NOT have any specialist surgeons available to perform a thrombectomy outside their working hours Monday-Friday 8am-4pm!! We were not even considered or offered the TPA.

My 54 year old partner suffered his 1st stroke within his brain stem, caused by a vertebrae artery dissection on 9th December 21. He was fortunate at that stage to not have any deficits, so they discharged him on Saturday 11th December at 8pm, with an anticoagulant.

18 hours passed from discharge & all of a sudden on Sunday afternoon, he was hit with a devastating stroke within the basilar artery (the original blood clot progressed from the PICA,) This caused life changing deficits. There were no ambulances available so we drove him directly to the hospital.

En route I phoned A&E to request support on arrival, only to be told they could not do anything until he was booked in. She so say kindly advised me to have a £1 coin or trolly token for a wheelchair!! (Mind blowing!!)

He continued to deteriorate that afternoon, yet his hospital records contradict the decline in consciousness, the left sided weaknesses, he continued to become less coherent. Unable to talk with full body paralysis. He suffered a seizure (not witnessed by staff as they were not present) he projectile vomited across the room, looking like a scene from the exorcist!! Still no nurse present or any intervention.

Although, we were informed later that evening that he would require an operation on Monday morning!

When I questioned “Why not now” especially as he continued to decline, the nurse clearly stated “We don’t have the service providers”

It wasn’t until I researched the protocols & learnt new knowledge regarding strokes, I discovered the surgeon’s working hours!!

I am still flabbergasted that Regionally Bristol do not offer life saving or life changing treatment outside the working hours 8am-4pm mon/fri. The thrombectomy was performed within a brief 20 minute operation!

As my partner stroked on a Sunday, we had no other option but to sit & pray! It’s totally despicable!

And as for the nurses care that so say followed, while he was hospitalised for 5 weeks before being transferred to rehab, the majority of the nursing staff lacked basic care, basic respect, & basic support. Yes, I totally understand the pressures on NHS staff, yet even his basic care needs were rarely met & they definitely amounted to neglect. Not just for my partner but for the other 4 patients within the same bay. Sadly the other patients did not have a voice or an advocate! What I witnessed on a daily basis is shocking & totally heartbreaking.

@CorraB thank you for sharing your journey about your partner. I’m sorry about the stroke and the lack of care.

with you there. I agree about doctors and nurses . I too was neglected by both not to mention being told by a nurse to shut up. Because I was able to voice my opinion yet the ward I was on was full of elderly people who didn’t dare or couldn’t voice their opinion’s.

I wouldn’t go to Carlisle hospital if you paid me. I now go to Hexham and Newcastle. Which care seems better.

Have you wrote to your MP?

Complain to hospital but then again I did with 5 letters but they kept on twisting my words to suit their answers. Totally disgusting their whole attitude to patients and families.

Good luck and look after yourself too . Kind regards Loraine

@CorraB it is really disheartening to read your story. I’m not surprised you’re still feeling raw 10 months on. Stroke treatment only available during daytime hrs is ludicrous.

I hope your partner is now doing ok.