A few days ago I decided to return to baking bread by making a sourdough loaf.
I had a starter in the fridge, inactive for six months, from before I had the stroke, but I was sure it could be roused and fit for use.
It was stored in a glass jar and as tradition dictates labelled with the name I had given it - ‘The Stuff’.
I took it from the fridge to let it come up to room temperature but unfortunately part way over I fumbled.
Like Humpty Dumpty it had a great fall, glass and yeast everywhere.
No King’s horses or King’s men would ever put that together again.
Like a numpty I had been walking around barefoot and was also leaving splodges of blood, from a cut foot, on the floor.

It wasn’t a pretty sight. Expecting to be banned from the kitchen forever I shouted for the Mrs to give me a hand to clear up.
She told me what she thought of me, but I don’t think the kitchen ban was brought down.

Eventually clean up was completed and the remains of ‘The Stuff’ were, sadly, consigned to the bin.

Well I still want to make a sourdough loaf, which means I need another starter.
So I must set about capturing the bacteria and yeast.
This mix is given many names, leaven, being one of them.
Tradition demands you name your leaven and I think I will call this new one ‘Wild Thing’.

Anyhow I thought it might be interesting to outline the process of catching the yeast and bacteria.
So here goes. Incidentally there are other methods but this one works for me and I will be sticking to it.
You might even be tempted to give it a try yourself.

First a little explanation. The air everywhere is teaming with beasties.
We are particularly interested in yeasts and bacteria, which will work together to create gas which will raise bread, cakes and other such baked goods.
The yeasts and bacteria are particularly interested in somewhere comfortable to feed and to reproduce.
Provide this environment, some moisture and food and we will successfully trap what we are looking for.

Tap water contains chlorine or chloramine, which is put there to inhibit the growth of the very life forms we are trying to catch.
This can be neutralised by treating a volume of tap water with half a Campden tablet and leaving it for a day, which is how I deal with it.
But you probably don’t want to do this so, instead, you can obtain a cheap bottle of still spring water and this will do just as well.
I stress, though, that I have found tap water, whether boiled or not, will very likely prevent the capture from being a success.

That is the moisture taken care of. Now for food, seek out a bag of strong bread flour from Aldi.
You might need to check different branches, they don’t all carry it.
It is far cheaper than elsewhere and just as good.
It will also be used when, eventually, we bake bread.

The only other ingredient needed is patience.
Loads of it.
This isn’t laborious work, you just need the ability to leave things alone and wait.
Well that is the theory dealt with.
Below are some photographs of my effort.
Enjoy.

Here are the photographs:

Dough slashed and ready for oven 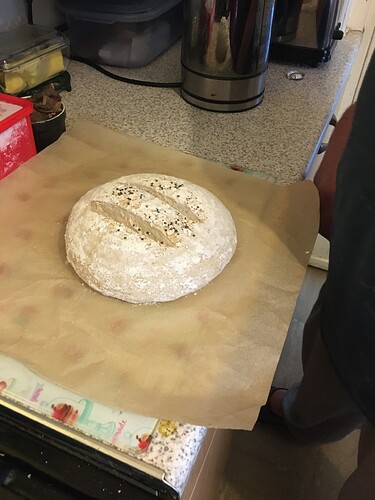 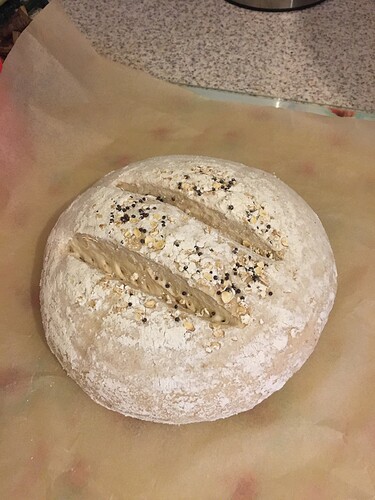 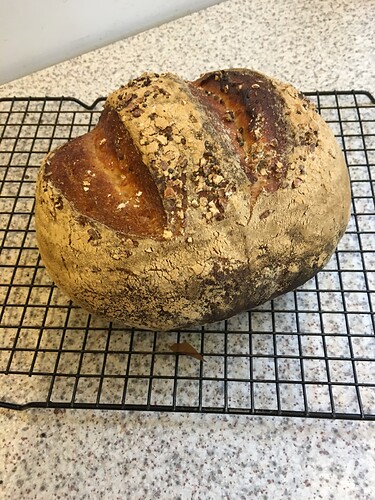 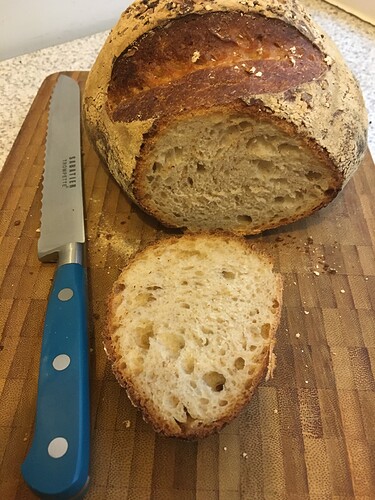 We’ll be having this later with home made leek and potato soup (made by Hilary).

Morning @Bobbi. Thank you for this as I had forgotten some of the theory. I have a sourdough starter called Sid. He is approximately 12 or 13 years old. He started off from some grapes. He has had off spring - my aunt got a portion as a Christmas present in a new jar one year and I hear they are doing well. My parents and husband feared the worst when I was in hospital but Sid survived. I alternate using him for 2 loaves and 1 loaf and a pizza base weekly. Enjoy your baking

Thanks for the comments.
Making pizza with it, I must try that. (Pizza dough recipe please?)
Also I have made a very nice fruit loaf, steamed (I think) in one of those new fangled pressure cooker Ninja Foodi things we got, again, just before my stroke.

Well done Bobbi. I make all our own bread, but use our processor. I think about tackling sourdough sometimes but not sure ai have the patience. Currently making quiche Lorraine. Have done it in stages. A couple more stages to go. I have a very wonky left arm and hand, but break less than I used to. Have also just changed my duvet and that requires all the patience in the world.

Hi @Bobbi. I just split the dough that I use for the bread loaves (normally always make 2 small loaves freeze them sliced for toast) so just starter and flour, small amount salt, I got a pizza stone cheaply on Amazon as it does need a blast of heat from underneath to make sure it’s cooked and with a crust underneath. Decided it was worth it as make one so often. Hey presto. I could eat pizza everyday​:pizza:

Oh God! I have a sudden yearning for a sourdough pizza! I haven’t had one for ages, so I’ll have to invest in some starter and a stone. Thanks for making my tummy tumble!

Bobbi that loaf looks just delicious. Thank you for sharing

@Dennis238 It is all in the way you creep up on them, keeping tongue sticking out of corner of mouth with pose all steely and determined, they just don’t know what hit them.
I’d share the secret but unfortunateley would then have to kill you.

I do love all the positive comments though